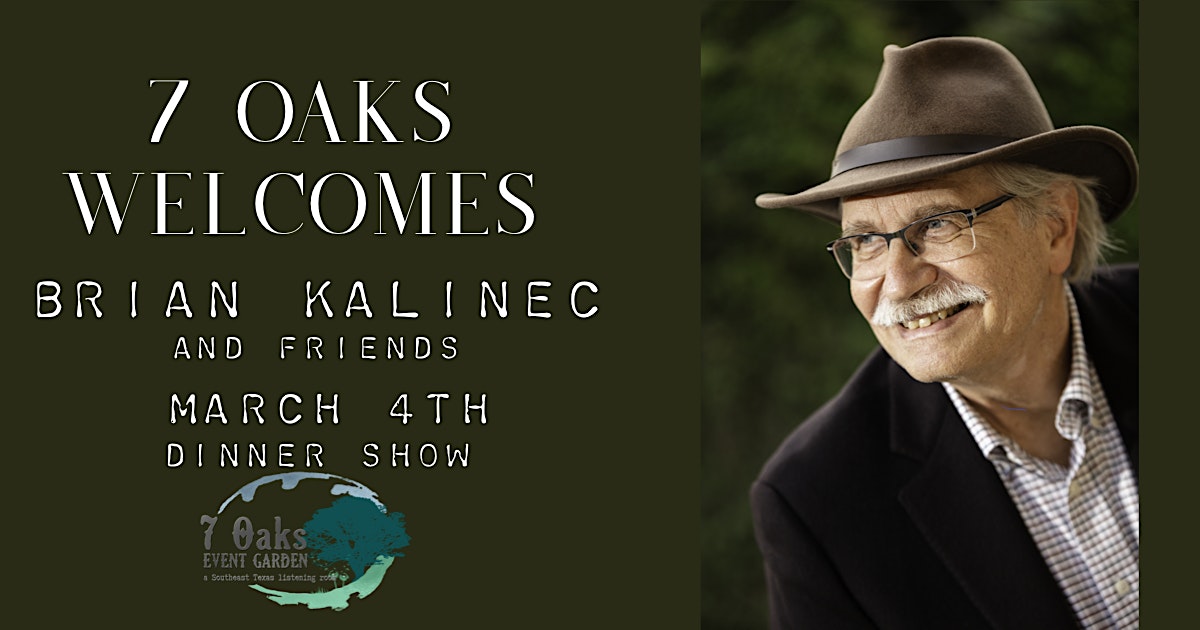 Powered by Eventbrite
7 Oaks Welcomes back, Brian Kalinec for his new album release!

Brian Kalinec is an award-winning, Houston, Texas-based Americana/folk singer-songwriter. His East Texas roots have combined with his urban experience to form his own particular view of the world, which is reflected in his songs. Renowned folk singer-songwriter Tom Pacheco says of Brian in his liner notes from The Fence: “…these songs resonate in our own times. I’m sure Woody would have loved them… he sings, writes, and plays so seamlessly that it feels these songs have always been there…He is a special messenger. I like him a lot.”

A native of Beaumont, Brian picked up the guitar at an early age and began a life spent crafting songs and nurturing songwriters. His writing has drawn favorable comparisons to that of Woody Guthrie, John Steinbeck, Rodney Crowell, and Jim Croce, and it resonates with audiences, fellow songwriters, and music lovers alike.

Over the years, Brian has received significant recognition across the US for both his songwriting and musicianship — winning contests like the Songwriter Serenade in Texas and the Big Top Chautauqua in Wisconsin, and taking second place in the Woody Guthrie Songwriting Competition. Brian participated in the “Shoulder to the Stone” project benefitting the Haitian relief effort and was one of the artists on the compilation album. He has performed at venerable festivals and venues — including the Kerrville Folk Festival, the Bugle Boy, Uncle Calvin’s Coffeehouse, and Gruene Hall in Texas, and the Rose Garden Coffeehouse in Massachusetts and the Huntington Folk Club on Long Island NY. Brian has toured in Europe as well, performing at festivals and venues in England, Scotland, Wales, and the Czech Republic.

Brian’s second solo album, The Fence, charted on radio both in the US and Europe, while his writing and guitar skills have drawn praise from well-known artists and musicians such as Steve Gillette, Steve Weisberg, Tom Pacheco, and Merel Bregante.

A recipient of the “My Texan” Award at the 2012 Texas Music Awards for his support of the music and musicians of the state, Brian is a past president of the Houston Songwriters Association and has produced a number of projects for other artists in addition to his own albums. He is also a past president and former board member of the Southwest Regional Folk Alliance. Brian has also served on the boards of Songwriter Serenade and Houston Live.

Songwriting has always been a passionate drive in Brian’s musical life, one for which he has been recognized again and again. Brian has a long and fruitful association with Texas songwriting. Brian co-produced the annual “Sonny Throckmorton Songwriter’s Festival,” sponsored by the HSA, in the 90s. He was a featured performer at the 75th anniversary of the discovery of the famed Spindletop gusher in Beaumont. He performed a song he wrote for his daughter Kerri titled “Challenged Child” at the 1980 National Convention of the Alexander Graham Bell Association for the Deaf.

Brian’s debut album “Last Man Standing” was released on Berkalin Records in 2007; he has released “The Fence” in 2012 charted in the US and Europe. In 2021, Kalinec & Kj (with Kj Reimensnyder-Wagner and Brian) debuted a duo album, “Let’s Get Away” with good airplay and folk chart success. Brian’s next solo project, “The Beauty of it All”, is scheduled for a Spring 2023 release.

Brian’s significant awards and accomplishments include:

Nominated in the category of “Musician of the Year,” Texas Music Awards – 2008

Nominated for “Singer/Songwriter of the Year”–Texas Music Awards -2013