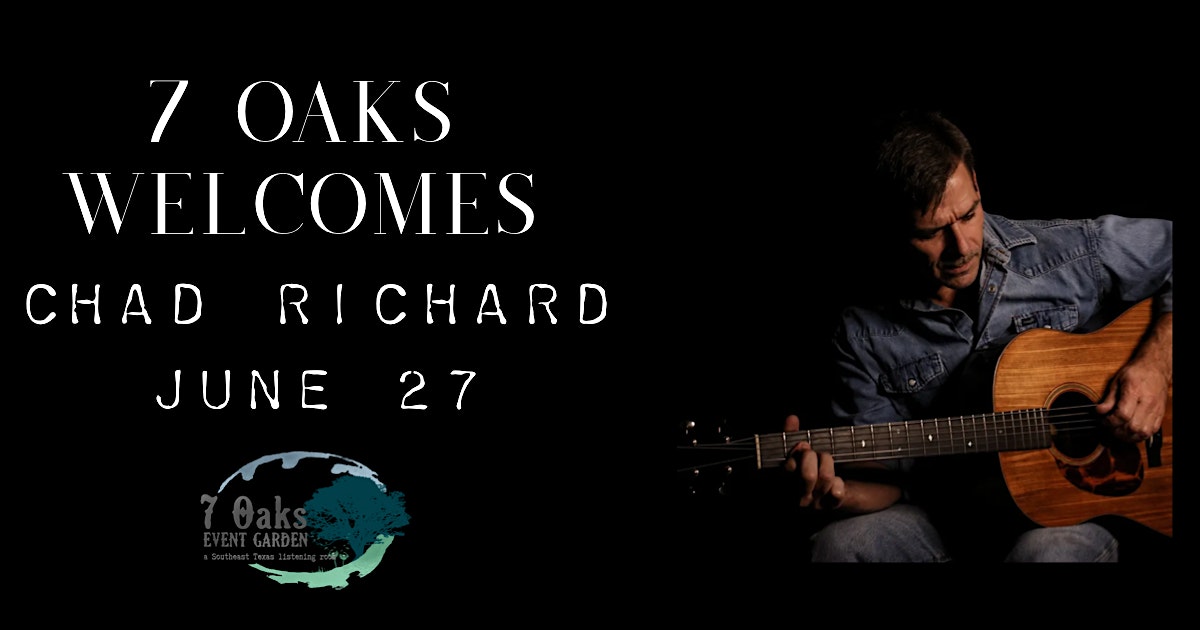 Chad Richard (pronounced REE-shard) is a native of the Sabine River bottom, where the river merges Louisiana with Texas’ soil as it winds along. Steeped in the mingling influences of the region, Richard’s songwriting and musical sensibilities fuse Cajun, Texas swing, country and blues styles into an effortlessly born offspring of each side of the river.

Growing up in Louisiana, Richard watched and was up onstage in his father’s popular regional Merle Haggard to Ray Charles influenced cover band starting from the tender age of 7. By 12, he was a budding drummer and went on to form teenage bands of his own, later moving to Texas where he learned left-handed guitar and began penning songs.

Richard writes songs from the heart. Like so many of us, he has loved, laughed, experienced fatherhood, suffered break-up, sorrow, and divorce, and loved again. The experiences of trying to do all the right things as single Dad shaped his songwriting in unique ways, as much as the musical influences surrounding him did. Holding it all together by day, working in a chemical plant, he’d still play solo gigs at night. When Walt Wilkins happened upon Richard at one of these gigs in 2012, Wilkins invited Richard to sit in Wilkins’ band, at about the same time Todd Purifoy (producer and photographer for the Texas Music Scene) approached him about making a record. Forces aligned, connections solidified and before long Walt was producing Richard’s successful debut album: Veteran’s Grocery (2015).

Worthy Cause is an album with songs characterized by stories as only Richard can tell them. “Slow Rollin’ Stateline” spins a tale of growing up on the Texas/LA border with “Zydeco to the east, Texas swing to the west,” as the song bears the musical marks of those influences. “German Angel” recounts a story of a couple living in a historic German house in the Texas Hill country, where the wife believes a ghost resides to watch over the manor, as told from the ghost’s perspective. “Worthy Cause” highlights Richard’s riveting vocals over hushed acoustic guitar and pedal steel, with an imperfect man’s tribute of gratitude towards the good, faithful woman who loves him. “Waters Rise” was inspired by Richard’s first hand experience of the kindness and humanity that shone through the floodwaters in the wake of hurricane Harvey – “waters rise, but people rise above.” “12 More Days of Blue” narrates the poignant tribulations of a loving, single Dad as he masks adult pain in order to experience the best with his child. The entire record showcases Richard’s striking ability to commandeer attention with his powerful vocal presence and compelling direct narrative style.

Over the years Richard has gained the reputation as a powerful live performer. Since the release of his debut record, Richard has played with and opened for Walt Wilkins, Drew Kennedy, Jason Eady, Tommy Alverson, Stoney Larue, Chris Knight, Uncle Lucious, and others. With the release of his follow-up record, Chad Richard will be expanding his touring schedule.

“I’ve seen it more than a few times now: An unassuming but confident dude

with a left-handed guitar starts singing & playing his songs, and a room full of people

are stunned by the soulful voice, then lose themselves in his great songs.

Chad doesn’t ever have to insist on himself – His completely unique Lousiana-Texas-Soul-Country voice grabs the listener, and in just a few minutes, everyone who hears him likes him, and feels like they know something about him. He sings about lives like ours, and after knowing him a few years, I believe he’s incapable of artifice of any kind. He’s as real as real gets. He is a gentleman and a great hang. He’s a great storyteller, a gifted songwriter and a treasured friend to many. I’m grateful to know him, to get to hear his new songs, and to have worked with him on this record. I always look forward to the next time we hang, play songs, And have fun.”