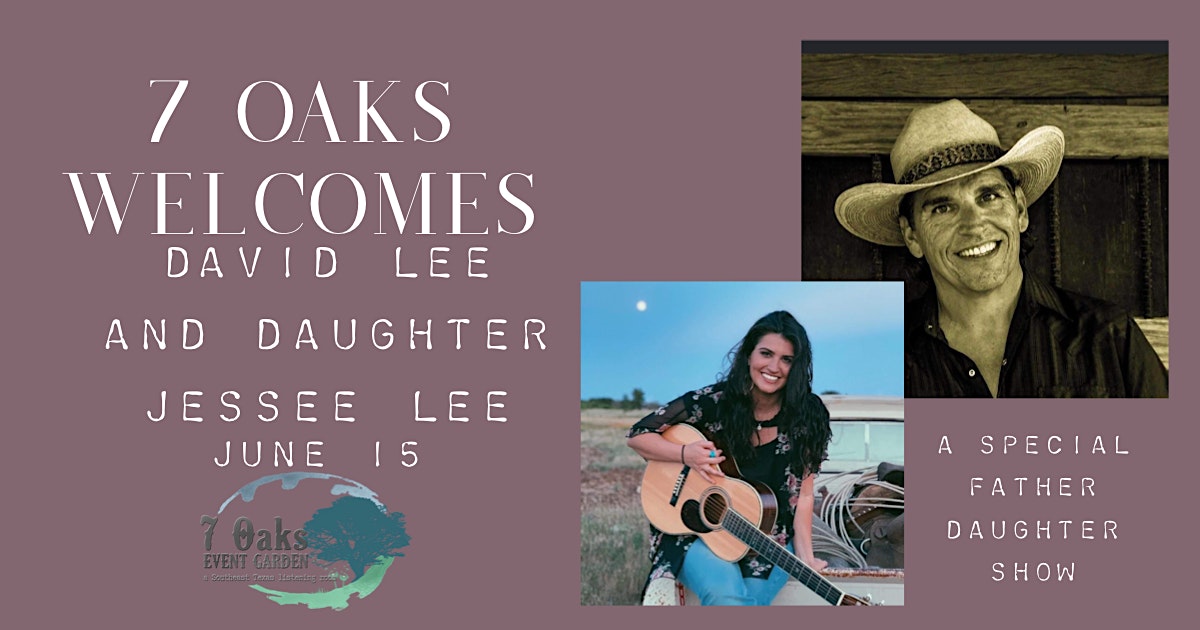 ABOUT DAVID LEE (scroll down to find Jessee Lee)

In an ever changing music world fraught with people trying to be something they’re not, David Lee is nothing but himself, a Wichita Falls born Texas native and a third generation musician.

The Grammy nominated and multi award winning songwriter cut his teeth playing a mix of blues and country music in Texas honkytonks.

In 1993 David moved to Nashville with his new wife Stacie to chase his dream of performing and writing music. Only weeks after arriving in Nashville, David put away the idea of performing and focused on honing his craft. He spent countless nights at songwriting venues not to perform his original music but to listen to the best songwriters in the world, Lee deciphered their rhyme schemes, their melodies, subject matter and their sheer honest emotion, David Lee was the perfect student.

Hours upon hours of writing lyric and melody, Lee always challenged himself to be better, to keep his mind open to criticism and change. With uncanny focus and collaborating with other aspiring writers like himself, Lee wanted the opportunity to write as a staff writer, to make a real living doing what he loved, writing country music.

In 1996, three years of working part-time jobs so he could write as much as possible, Lee signed an exclusive publishing deal with publisher and manager Estill Sowards and John Dorris of Ten-Ten Music Group.

After a few years as a staff writer David Lee and co-writer Tony Lane landed their first cut together “This Old Heart” on Terri Clark’s “How I Feel”, shortly after he penned John Michael Montgomery’s title cut “This One’s Gonna Leave a Mark”.

His first Top 10 came with Leann Womack’s “Now You See Me Now you Don’t”, followed by Brad Martin’s “Before I Knew Better” in 2002.

In 2003 David signed with BMG Music Publishing and co-wrote his first #1 song “19 Somethin” for Mark Wills, in 2004 “Letters From Home” for John Michael Montgomery, followed by “Lucky Man” performed by Montgomery Gentry. In 2008 Tim McGraw and Faith Hill sung Lee’s riveting love song “I Need You” which Lee received a Song of the Year Grammy nomination.

After moving back to Texas in 2015 David Lee picked up where he left off as an Independent Artist before embarking on an unknown future in Music City years before. In 2016 David Lee debut his first record which would be Lee’s first and last recording in Nashville, “The Wichita Kid.” The concept record chronicles Lee’s life, and showcases his musical demographics from blues to swing to traditional country music and genres in between.

In late 2016 Lee released his second project recorded in his home state of Texas with the first single and video to be the title track “Bringing Hippie Back”. The lyric gives a humorous nod to the rebellious decade our grandparents didn’t see coming in the seventies.

In the spring of 2019 David Lee released his third EP, “Songbird”. A project written solo by Lee. The title cut was inspired by his personal gratitude toward all the musicians in the world who keep music alive no matter rain, shine or Covid. David Lee’s first single from the EP was “Billy Joe Shaver Song” released in the spring of 2021. The song was inspired as a tribute to the legendary songsmith and late Billy Joe Shaver. The cd’s genre has country roots with yesteryears southern rock undertones.

In 2019 Cody Johnson cut a fifth Lee tune, “Ain’t Nothin’ To It” written with Leslie Satcher. In late 2020 Texas recording artists Wade Bowen and Randy Rogers cut “Rodeo Clown” written by Lee and Chris Dubois which climbed to #1 on Texas radio charts and was Texas Song of the Year in 2021.

Today, Lee continues to have his fingers in a myriad of projects such as fronting a band, producing projects, and mentoring up and coming artist in Texas to include his daughter Jessee Lane Lee, who he is most proud of and mesmerized by her artistry as an independent artist and her exceptional songwriting abilities.

Jessee Lee, daughter of Grammy nominated hit songwriter, David Lee, is a fourth generation musician from Nashville, Tennessee. With her father being a hit songwriter, she grew up running around publishing offices and recording studios among the best musicians and songwriters in the world. There is no doubt she absorbed all of the creativity she was brought up around and honed her craft at a young age. Jessee began playing guitar and singing by the time her hands could hold an instrument and began writing songs at the age of nine. Growing up with her father, she claims writing her own songs was a staple in her household if she was going to play music.

After moving to Texas in 2015 and attempting a year and a half of college, Jessee decided to chase her music dream. She began playing full time with a small band and also doing solo acoustic shows in the Texas honky Tonks. She has performed all over Texas in venues such as Gruene Hall, Luckenbach, John T. Floores Country Store, and many more. After realizing she needed to focus more on building a catalog of original music, she moved back to Nashville, Tennessee at the end of 2019 to write songs. Now, in 2022, she is chasing an independent music career and has a home base in the Hill Country of Texas while still going back and fourth to Nashville to write music. She is on the road every weekend playing all over Texas and is even branching out West playing in Colorado, Montana, and Wyoming.

Jessee is one of the most unique musicians you will find with a blend of old country, soul, jazz, and folk. Lyrically, she was influenced by songwriters such as her father, Tony Lane, Dolly Parton, and Guy Clark. Melodically, Jessee was influenced by “not so country” artists such as Billie Holiday, Frank Sinatra, Adele, Ray Charles, Amy Winehouse, and Leon Redbone. Jessee mostly had a taste for classic sounding music with interesting chords and unique messages. Drawn to music and life before her era, her original songs will make you feel like you’re stepping back in time when song lyrics painted pictures and melodies moved your soul.

Fans have long awaited the release of Jessee Lee’s music and she finally released her first single titled “Dive Bar Superstar” in June of 2022. This song was the first release off her 7-song EP titled “Dive Bar Superstar”. This project was cut at a studio called “Station West” in Nashville, Tennessee and Jessee co-produced the project with her father, David Lee. She also worked with Austin Stanley, Luke Wooten, and wonderful session players to make this EP come to life. She plans on putting out the full project early 2023. You will hear her rare blend of old fashioned and edgy original songs that will make you see why she is seen as one of the best up-and-coming females in the Texas scene.