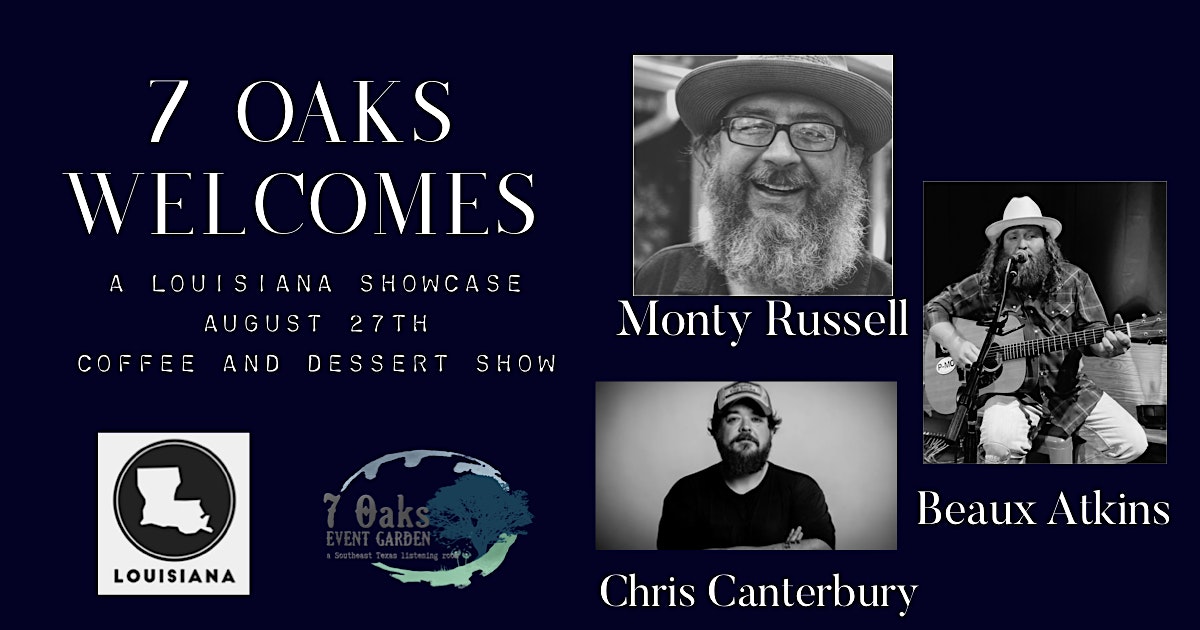 Powered by Eventbrite
A coffee and dessert show.

Monty Russell (Bios for Beaux and Chris below)

Monty Russell is a singer, songwriter, producer, Americana radio personality, and concert promoter based in Northern Louisiana. He is currently touring to promote his latest recording “FAT MAN,” a collection of self-penned southern R&B tunes. Russell is also the co-host of the “The Roadhouse,” a wildly popular Americana “Y’allternative” radio program in its 18th season on KXKZ 107.5, a 100,000 watt station based in Ruston, LA.

After having been taught to accompany himself by sliding a knife blade over an open E tuned guitar at the age of 8, and having been immersed throughout his youth with the honky-tonk, gospel, western swing, and blues music played by his Grandfather Leon Russell, a rural self-taught barrelhouse piano player, guitarist, and fiddler, Monty set out on a musical journey that has lasted over 30 years. He has played theatres, listening rooms, festivals, honky-tonks, churches, and any other place people would listen.

“When I sat down to write this project, I tried to present each topic as a straight-forward Saturday morning kitchen conversation. That’s how I approach songwriting and it’s worked for me for a long time” says Chris Canterbury, a Louisiana native singer-songwriter, now based in Nashville.

The project Canterbury is talking about is Quaalude Lullabies, a nine track collection of mostly sad songs that offers on-the-nose lyrical phrasing, subtlety loose production, and an honest insight into razor-edge topics like addiction, depression, and loneliness.

In what started as a thought experiment, Quaalude Lullabies was self-produced by Canterbury, his first opportunity to be on both sides of the control room window. “I wanted to woodshop a record together that felt like Nebraska,” says Canterbury. “I wanted it to be loose like a box of bedroom demo tapes, but cohesive enough to stand on its own. I feel like we ended up with a solid album.”

On the album opener “The Devil, The Dealer, & Me”, he lyrically paints a self-portrait of despair and its brutal anticipation thereof. Lines like “The truth doesn’t care if you choose it, a heart only breaks when you use it,” and “Cold as a shoulder, dry as a bone, a memory is worthless if you make it alone,” haunt their way through the waltzing arraignment. Its threadbare production, consisting only of an upright bass, Wurlitzer organ, and a buttery telecaster, sets the sonic signature of the project.

“Fall Apart” continues the eloquent brokenness in Canterbury’s autobiographical musings. Here he highlights the veracity of being a solo working musician, juxtaposing the lonely lyrics with a somewhat playful melody from an acoustic guitar.

The only cover on the album, written by Will Kimbrough, “Yellow Mama” tells the tale of the singer’s last moments before succumbing to the courtesies of the Alabama electric chair. The traditional-sounding song was tracked live in a single take, subtly building anxiety as the singer reaches his demise.

Closing out the A-side of the album, “Felt The Same” stays in that minimalistic production lane with only a B3 organ and a Tele played through a Leslie. Lyrically, Canterbury intertwines concrete imagery of self-described illegitimacy with metaphorical insight.

As we come to the first song tracked with the full band, “Kitchen Table Poet” showcases the central tenet of Quaalude’s ethos, which is there’s no limit on how far to lyrically describe a setting, while maintaining a casual conversation with the listener. “I met a man in Waverly, Alabama once that said he’d never left the county. He also said he made the best apple brandy in the state. I remember everything about that day”, says Canterbury, “His Winston Lights, the grit under his nails, and his bottomless bag of on-liners – but I can’t remember his name. That’s where this song was born.”

Keeping with the band trend, “Heartache For Hire” blends the genre-standard idea of heartbreak with a swampy pedal steel and organ-forward groove. “Sweet Maria”, the only love song on the album, places the listener in the back seat of the singer’s car as he and his “sweet Maria” take the long way home. The juxtaposition of these two tracks side-by-side on the album demonstrate the wide-open range of the project, without sounding misplaced at all.

“Over The Line” layers the finality of reality over a driving country groove, perfectly possibly, since the song describes the final long haul of the aging protagonist, a career over-the-road truck driver. It’s a solemn topic presented, once again, in conversational prose that feels neither sullen, nor predictable.

Album closer, “Back On The Pills”, as the title suggests, is subdued only in production, with a lonely acoustic guitar and the haunting of a gentle B3 organ tucked in the mix. Lyrical offerings such as, “I found Jesus in the nightstand, the sunrise on the wall, I’d like to call an old friend if I still had a friend to call”, and “Father forgive me, I know I’ve sinned, but I’m well aware of the shape that I’m in” paint a portrait of desperation and addiction (and acceptance of the aforementioned) that’s far more complicated than the track seems at first.

Getting out of the way of the story and letting it speak for itself has been a guiding force for Canterbury for almost his entire songwriting career, and it’s evident in Quaalude Lullabies that he’s perfected that area of his craft. Instead of waxing poetic over hackneyed issues and tropes, Canterbury eloquently illustrates the complexities of life with a millworker’s vernacular and a hefty southern drawl.

Beaux Atkins picked up a guitar and began playing for friends a few short years ago. With a big soulful southern voice and an equally big charismatic personality, he has worked hard at winning fans until he now is able to earn his living playing music and singing across the Deep South. He has shared the stage with the likes of Blackberry Smoke, The Benjy Davis Project, Frank Foster, Cody Canada and the Departed, The Eli Young Band, Corey Smith, and more. The natural progression to accompany this gigging success was to make an album that showcases the talent and hard work he lays out to his fans every night.

On vocals he is joined by gospel greats The McCrary Sisters on the title track, and by Indie singer-songwriter Bethany Raybourn, Shreveport media and vocal star Linnea Fayard Allen, and Cook and Russell.

With contributions from Louisiana songwriters Russell, Cook, Chris Canterbury, Wade Reeves, General Keith Patterson, Adam J. Jones, Derek Mixon, and Moore supplementing his writing talents, Atkins lays out Southern Rock anthems and soulful blues that detail the hard road a musician chooses to travel and the people he meets along the way, croons soulful songs about love lost and soulmates gained, and sings and shouts praises of sin and redemption.

Shout Hallelujah, the title track, is one such rousing honky tonk gospel track, laying out the sins of riverboat gamblers, honky tonk drifters, and out of control train engineers who find Jesus in the nick of time. Beau Atkins says the title takes special meaning because for him the album comes in the nick of time to help him move even further on his musical journey, and for that he shouts “hallelujah.”