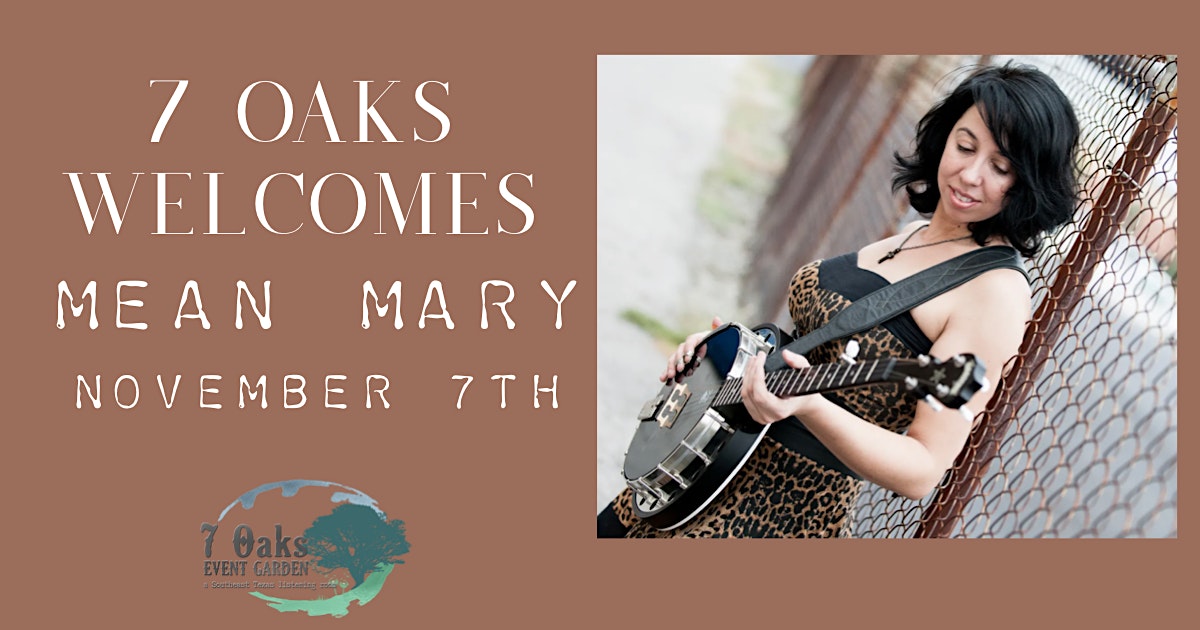 Mean Mary (Mary James) is a multi instrumentalist playing fiddle, banjo and guitar! She is also a novelist and writes with her mother.

Mary James, youngest of six children, was born in Geneva, Alabama, though her family lived in Florida, a couple miles below the Alabama line. Her mom (author, Jean James) and dad (WWII veteran, William James) lived a very nomadic lifestyle. On one occasion they packed up the family (Mary was four at the time) and moved from Florida to North Minnesota, near the Canadian border, to rough it in the wilds.

For three months they lived in a tent built from a roll of Visqueen they’d brought with them. During this time, they built a log cabin using only an axe, hand saws, and the trees around them. They cooked their food on a campfire, got their water from a deep hole they’d dug, and read at night by the northern lights shining through the clear walls of their plastic tent. On one occasion their tent was mauled by a large, 7’1” black bear that Mary’s mom, Jean, was forced to shoot.

The tent soon became unbearably cold, and when they finally moved into their almost completed log cabin, winter was upon them. Without electricity or running water, and cold enough to freeze water five feet from the only source of heat (an old wood stove), the family spent many hours reading books by kerosene lamp and enjoying the great outdoors (cutting firewood!).

Mary’s oldest brother, Jim, who’d just joined the Navy, sent the family a guitar and a compilation tape of songs he liked. With a battery-powered tape-player, the family listened to the music of Hank Williams, Jr. and Dolly Parton. It wasn’t long before Mary was singing the songs plus vocalizing all the instrumentation. Seeing her talent, Mom and Dad bought guitar books, and Mom started teaching all the children to play the guitar. Mary and her brother Frank were the two who would turn music into a career.

Mary learned to read music before she could read words and was an official singer/songwriter before she’d started her first day of kindergarten. With the help of her mom, she wrote her theme song “Mean Mary from Alabam’.” The press immediately baptized her with this handle, and she’s been Mean Mary ever since

The James family eventually migrated back to Florida. Mary’s dad (who was sixty when she was born) was now retired, and Mary’s mom searched for ways to help support the family as well as feed Mary’s musical appetite and the varied interests of their other children. She started an organic truck farm, built and sold live-animal traps, collected live reptiles, amphibians, and mammals for wholesale distributors, and collected live venomous snakes for antivenom production. The children joined in all these undertakings and found it great sport.

On the Road Again:

Mary was now playing guitar, banjo and fiddle. She recorded her first album at age six, and spent five hours a day on instrumental and vocal practice along with her live performances. When she upped her music study time to seven hours a day, and her road shows began to multiply, it became impossible for her to attend school. At the end of the second grade, she went into home study and also started appearing daily on the Country Boy Eddie Show, a regional TV program out of Birmingham, Alabama. During this time, she also appeared regularly in Nashville, Tennessee at the Nashville Palace, on the Nashville Network, the Elvis Presley Museum, and on Printer’s Alley.

In spite of her hectic schedule, she found time for her studies and when only nine years old she aced a state required test at a 12th grade equivalency level. This wasn’t surprising to her parents who had witnessed her read the entire Gone with the Wind novel at age seven.

Her guitarist brother, Frank James, who’d now joined her on stage and in the home school program, also excelled in his studies and at age fourteen taught himself trigonometry. He graduated from high school at fifteen.