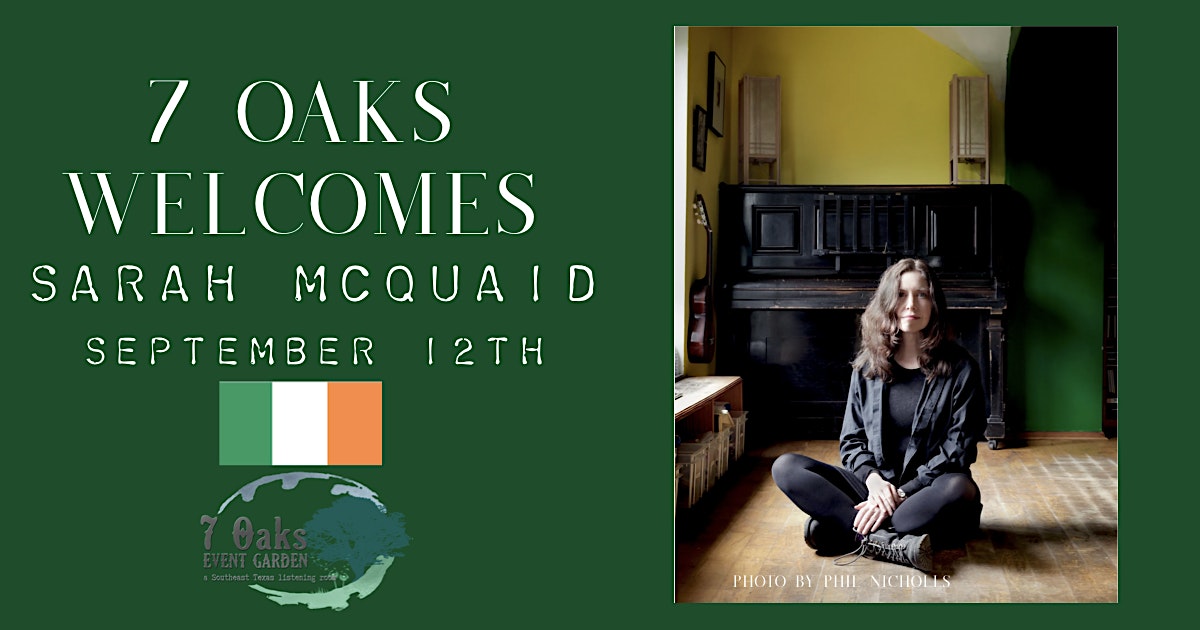 “One of the most instantly recognisable voices in current music … Shades of Joni Mitchell in a jam with Karen Carpenter and Lana Del Rey.”

“She reached parts other singers fail to do … There is emotion, beauty, passion and musically great arrangements and fab playing. It’s a complete package. I loved the show and was very moved.” — Rob Bozas, Bozas International (Publisher, Peter Gabriel/Real World)

Born in Spain, raised in Chicago, holding dual Irish and American citizenship and now settled in rural England, she brings the eclecticism of her background to her “captivating, unorthodox songwriting” (PopMatters) and choice of material, spanning genres and defying categorisation.

All this is abundantly demonstrated by her new live album and video series The St Buryan Sessions — but needs to be savoured in person to be fully appreciated.

Born in Spain (to a Spanish father and an American mother) and raised in Chicago, Sarah was taught piano and guitar at an early age by her folksinging mother, and remembers being inspired by meeting her distant cousin, well-known singer/songwriter/storyteller Gamble Rogers, at her grandmother’s house in Indiana.

From the age of twelve she was embarking on tours of the US and Canada with the Chicago Children’s Choir, and at eighteen she went to France for a year to study philosophy at the University of Strasbourg.

In the mid-1990s Sarah found her way to Ireland, where her authorship of The Irish DADGAD Guitar Book (published in 1995, still in print and selling worldwide via Novello & Co./Music Sales Inc./Hal Leonard) led to an invitation to write a weekly folk music column for the Evening Herald.

Her brief soon expanded to include album and gig reviews, while Hot Press also enlisted her as a reviewer, regular columnist and writer of longer interview/profile pieces on artists from Alison Krauss to Jah Wobble, Stereophonics and Bentley Rhythm Ace amongst others.

In 2007, she switched roles from interviewer to interviewee, re-releasing her 1997 debut album When Two Lovers Meet and launching her first solo tour with a memorable appearance on Irish national television as musical guest on John Kelly’s Friday night RTÉ One arts TV programme The View (a video of which can still be watched via Sarah’s YouTube channel).

The same year saw her moving to rural West Cornwall, England, and in 2008 she released her second album, I Won’t Go Home ’Til Morning. In contrast to the first album’s focus on Irish traditional songs and instrumentals, the follow-up was a celebration of old-time Appalachian folk, with Sarah’s arrangements punctuated by her own compositions and a cover of Bobbie Gentry’s classic “Ode to Billie Joe.” The two albums were re-released as a double-CD set in North America in 2010 and immediately went to No. 1 on both the album and artist Folk-DJ chart

Not long after her arrival in Cornwall, Sarah struck up a friendship with a fellow mum outside the gates of her children’s school. That fellow mum turned out to be Zoë Pollock, writer and performer of 1991 UK Top 5 hit single “Sunshine On A Rainy Day,” and the pair soon found themselves co-writing songs for an album released in 2008 under the band name Mama. Entitled Crow Coyote Buffalo, it was lauded by MOJO’s Colin Irwin as “a pleasingly maverick mix,” by Siobhán Long in The Irish Times as “Janis Joplin’s freewheeling spirit crossed with Joni Mitchell’s lyrical density” and by Spiral Earth’s Iain Hazlewood as “Two pagan goddesses channelling the ghost of Jim Morrison.”

The collaboration with Zoë proved to be a turning point in Sarah’s career – not only because it prompted her to start thinking of herself primarily as a songwriter (rather than a folksinger who happened to write an occasional song), but also because it introduced her to Martin Stansbury, a longtime collaborator and former bandmate of Zoë’s who produced and engineered the Mama album, then became Sarah’s manager and sound engineer, accompanying her on all her tours worldwide since 2009.

Like its predecessors, Sarah’s third album The Plum Tree And The Rose (Waterbug, 2012) was recorded in Trevor Hutchinson’s Dublin studio and produced by Gerry O’Beirne, but it represented a departure from her previous work in that nine of its thirteen tracks were originals. Also featured were medieval and Elizabethan numbers and a cover of John Martyn’s “Solid Air”. The album made it to No. 3 on the Folk-DJ chart, No. 5 on the Euro Americana Chart and No. 6 on the Roots Music Report Folk Top 50.

To record her fourth album Walking Into White (Waterbug, 2015), Sarah travelled from her adopted home in Cornwall, England, to the small town of Cornwall, New York, USA, in order to work with co-producers Jeremy Backofen and Sarah’s cousin Adam Pierce (Swirlies, Mice Parade). On its release, Walking Into White was selected as Album of the Month by FolkWords, which went on to nominate it for both Best Album from a Female Artist and Album of the Year.

In April 2017, Sarah was presented with a Lifetime Achievement Award by the Ards International Guitar Festival in Newtownards, Northern Ireland (previous recipients include legendary guitarists Davey Graham, John Renbourn, John Martyn, Martin Simpson, Pierre Bensusan and Martin Carthy) in recognition of her innovative use of the DADGAD tuning and her authorship of the aforementioned Irish DADGAD Guitar Book. She regularly presents workshops on the DADGAD tuning (as well as on songwriting, tour booking and more) at festivals, music schools and venues around the globe, and is working on a follow-up book on DADGAD song accompaniment.

Sarah’s fifth album If We Dig Any Deeper It Could Get Dangerous (Shovel And A Spade, 2018) was produced by cult guitar great Michael Chapman, memorably described as a “granite-faced 76-year-old Yorkshireman hailed by the likes of Meg Baird, William Tyler and Ryley Walker as the godfather of new cosmic Americana” (The Guardian). With the release of this album, Sarah expanded her battery of instruments to include piano, electric guitar and drum, and it drew critical raves internationally: Dutch music magazine Heaven hailed it as “an early contender for folk album of 2018,” the UK’s fRoots said it was “a collection to savour” and the USA’s PopMatters called it “a gateway into a true innovator’s soul.”

In 2020, with her spring tour cut short due to the COVID-19 crisis, Sarah mounted a successful crowdfunding campaign to finance the filming and recording of a full-length live concert sans audience in the beautiful medieval church of St Buryan, just over a mile from Sarah’s home.

Produced and engineered by the above-mentioned Martin Stansbury, The St Buryan Sessions was released in October 2021 by Sarah‘s own Shovel And A Spade label on CD and limited-edition blue vinyl double LP. The album made it onto “Best of 2021” lists on three continents and features stunning solo performances by Sarah on acoustic and electric guitars, piano and floor tom drum, her lush, distinctive vocals echoing through the soaring space.

“McQuaid’s voice, a fragile, starkly resonant alto, has always been a thing of folk-trad beauty,” wrote reviewer Kenny Berkowitz in Acoustic Guitar magazine, “but here, with ambient mics placed around the church’s interior, it takes on a new joyfulness and a deeper darkness.” Ink 19’s Bob Pomeroy called it “a starkly minimalist recording of exceptional beauty”, and Folk Radio UK described it as “a wonderful, expressive and intimate live album from a consummate performer.”

“There is an audience,” wrote Adrian Jones in Songlines, “– it’s you, and you’ve kept shtum in the back pew. It’s an intimate and changing 70 minutes, ending with the silence of this hallowed setting. Sneak out quietly. And then listen to it again!”

Videos by Cornish filmmaker Mawgan Lewis of all 15 tracks on the album can be viewed on Sarah’s YouTube channel, together with a 10-minute video introduction to Sarah featuring live and studio performances intercut with interview and behind-the-scenes footage.