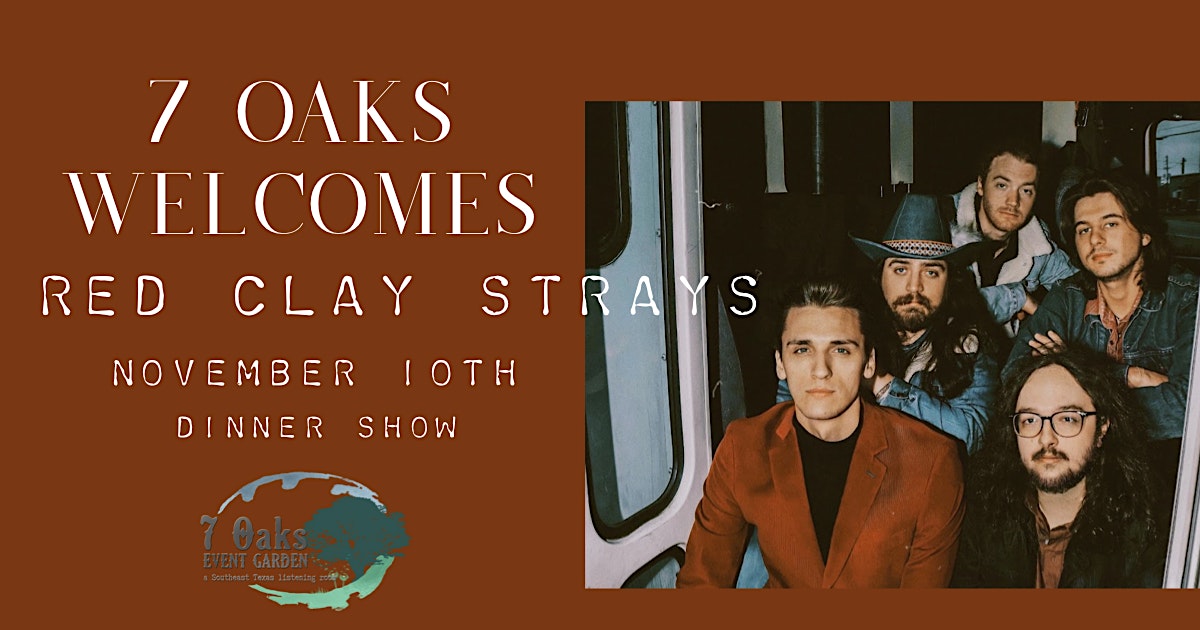 Powered by Eventbrite
7 Oaks Dinner Show! Caterer to be announced. This show will have two tiers of ticketing. Seated in our 80 capacity room & standing.

Standing areas are side stage, smoking area via monitor or in the nest area via monitor. (all standing locations still allow for a physical viewing approximately 50 ft from stage.

With a sound as classic as the crackling of a Sun Records vinyl still spinning somewhere in Memphis, yet as fresh as the musical stylings of the 21st century, The Red Clay Strays are busy making waves with their spellbinding and genre-bending brand of tunes. Reminiscent of the vibrant heyday of southern music, the band finds their origins in the styles of classic country, rockabilly, and gospel-fed soul all the while ushering in a new era of rock-and-roll that is as distinctive as the men who form it. Born and bred in the red dirt clay of south Alabama, Brandon Coleman (lead vocals/guitar), Drew Nix (vocals/electric guitar/harmonica), Zach Rishel (electric guitar), Andrew Bishop (bass) and John Hall (drums), blended their unique individualities and influences together to create a band with a rare sincerity that is not often seen in today’s industry. They have spent the past five years cutting their teeth in the Gulf Coast music scene while simultaneously running the roads discovering who they are and where they belong in the world as they plant roots in towns big and small across the country by burning down every stage they step on—proverbially, of course. Their high-energy, emotive stage presence is as lively as their melodies, though they possess an uncanny knack for tuning into their softer side when the song warrants it. Whether the song has listeners tapping their toes and shaking their hips as in previous singles such as “Good Godly Woman” and “Doin’ Time,” or tugging on the heartstrings in ballads like “Wondering Why” and “Heavy Heart” off their upcoming debut album, the band displays their penchant for storytelling in any song they sing. For The Red Clay Strays, music is simply a way of life—they eat, sleep, live, and breathe it—which is emphasized by their passionate artistic integrity as there is evidently nowhere else they would rather be. At best, they are well on their way to being America’s next big thing, but at the heart of the matter they’re just five guys from Mobile, Alabama who want to play their music and fellowship with people while they do it.

Coming hot off the heels of major festival appearances, such as Bristol Rhythm and Roots, Hangout Music Fest, and Mile-0 Fest where they have quickly become known as a fan favorite, The Red Clay Strays have found success by sharing stages with iconic acts like Blues Travelers and Drivin’-N-Cryin’ as well as booking upcoming dates alongside some admirable company—namely, The Steel Woods and Midland. Solidifying their status as bona fide road warriors, the band has honed their sound by way of paying their dues in dives and little venues around the United States all the while fostering relationships in the course of wowing audiences, ultimately gaining momentum propelling them towards larger stages in anticipation of releasing their first full-length LP, Moment of Truth, in April 2022. In efforts to stay true to their origins and the authentic vibe they envision, the record was recorded in an old-school manner, completely in analog as their heroes did in days gone by. Refusing to let the pitfalls of the COVID-19 pandemic put out their fire and quell their passions, The Red Clay Strays banded together in one room at a studio in the hills of Huntsville, Alabama cutting every track live in efforts to translate the explosive chemistry from their live performances to recordings. Their multidimensional sound lends to an album title, and song listing, with multiple meanings, as Moment of Truth is an introspective look at their transformative journey from young musicians to seasoned stars. The album is as sonically strong as it is lyrically sound, producing a work of art that will forever stand tall amongst its peers and the late greats as a musical masterpiece. As an independent band with a focus on the fans as their record label, they have continued to amass fervent supporters as well as much-deserved industry attention along the way, by accruing numerous accolades including a song showcase in a major motion picture and multiple regional fan-voted awards under their belts. At this point in their careers, it is evident the world is noticing—and for good reason. The Red Clay Strays are prepared to take the world by storm come hell or high water as they reveal their Moment of Truth. So…How ‘Bout You Come On and join the ride?